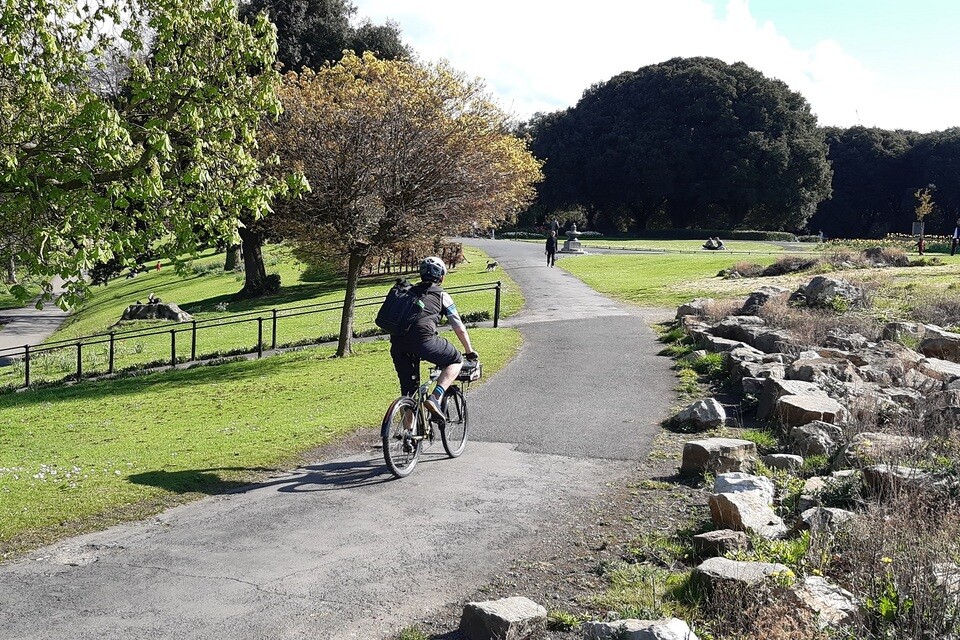 With synthesizers in his bike basket, he plans to perform a techno set on every major bike path in

At 4 p.m. on a Friday evening, Gary Byrne finishes his work in Tallaght.

He mounts his golden bicycle, leaves the Cycle Superstore and immediately turns onto the busy tree-lined Airton dual carriageway on the edge of the Broomhill industrial estate.

He pauses briefly along the curb to reach the handlebars and play with an aluminum and wood rack inside the bike’s shallow basket.

The rack contains three miniature Korg analog synthesizers and a mixer, with an arch of colored cables inserted into each device like a pastel rubber rainbow.

Adjusting the levels on the black mixer, he fumbles behind the rack to crank up the volume on a set of cylindrical speakers, and launches a series of dance loops, a thick, fuzzy bassline with a beat that clicks and skips like a vintage drum machine from the 70s. .

Byrne zips down the bike path, going over and under bridges, and veering into the occasional residential street, all the while capturing his journey on a GoPro strapped to the handlebars.

His goal, he would later say, was to perform and film his techno sets and travel on each of Dublin’s major cycle routes.

He has already covered sections in Sandycove, Tallaght and in the city center from Merrion Square to Smithfield.

The next line is the N11 road towards University College Dublin and the Lanes of Howth towards the city centre.

The latter particularly excites him, he says. “I want to do this at night with all the lights on as you walk into town.”

Byrne’s biggest plan, however, is to bring a group of friends on a big cycle around Phoenix Park. “You really would be able to shout that on a nice slow spin in the park.”

Byrne began his techno cycle adventures in early March. But his interest in dance music dates back to the mid-1990s, he says.

He was a leader in dance music, he said. “Mostly acid house and hard techno and a lot of my friends were DJs or sound engineers.”

He lived with friends in a house in Phibsborough and, he says, whenever a big band came to play in the town, there was a good chance that they would eventually return. “Because we had bridges in place.”

He was also working at that time as a bicycle courier.

It started as a summer job after college, Byrne says. “Nine years later, I was still there. It was very fun.

Each day he traveled 70 to 90 miles around Dublin, often venturing as far as Bray.

In his spare time, he went mountain biking. He also competed in an underground “alley cat” courier racing league.

Producing dance music came much later. In the 1990s, he will play a little on keyboards, using pirated software.

But musical gear tended to require crazy money, he says. “The cheapest small sequencer box was £400.”

About ten years ago, he began to accumulate electronic equipment.

His brother left him some gear when he moved and he scoured the music sections of online marketplaces like Adverts.ie. After a few years, Byrne had enough of a facility to produce tracks himself.

“In the ’90s, you were looking for twenty thousand dollars to get a setup like this,” he said recently, in his current studio upstairs in his house.

Mounted on the wall, next to a portrait of Garfield reimagined as the occult goat deity Baphomet, is a square gold keyboard.

Portable ribbon synthesizers sit on a shelf. Next to a laptop and monitor on his desk are other synths, a mixer, samplers and a sequencer with a grid of colorful glowing buttons.

GoPro cameras and webcams are in the room. And behind his chair is a green screen. He uses it, he says, when broadcasting live from home.

It started on Twitch. It was a way to keep in touch with his three brothers and his father, he says, who all played Minecraft together.

He was looking for ways to record himself jamming, Byrne says. “So I said fuck it, I might as well start recording on that.”

On Saturday nights, he broadcast a two-hour live set. As he settled into this medium for DJing, the idea for his techno cycles slowly emerged.

Byrne consults occasionally for MyVolts, a power supply company, based on Pearse Street.

Initially, Swords says Byrne was a customer looking to power up his synthesizers. But soon he got involved in testing the company’s products.

During the pandemic, she says, “he wanted to develop something that was completely mobile.”

“He just got this basket for his bike,” she says, “and I guess the two things came together.”

In March, the company was demonstrating at the Musicmaker store on Exchequer Street, said Bryne, who was now standing next to his bicycle on a grassy hill near the People’s Garden pond in Phoenix Park.

They asked if he could bring some of his gear to showcase their cables and a USB drive that could power amplifiers and synthesizers.

Byrne doesn’t drive, he says. He stowed his gear on his bike instead.

The synthesizer rack fit perfectly into his cart, says Byrne, and he had an epiphany. “Happy fucking days.”

Byrne first tested the platform the night of the in-store demo, he says. “I went to the Pearse Street docks and just started experimenting.”

Soon after, he began filming his cycles and overlaying the videos onto his weekend live streams.

The footage is hypnotic, he says, replaying raw video of himself whipped through Leinster House under lampposts.

Evenings are best, he says. But it all depends on the weather.

Although the skies were grey, as Byrne cycled from Tallaght towards the city centre, the clouds dispersed as he moved at high speed.

At a crossroads in Kimmage, a woman approaches to admire her installation. The light turns green – and Byrne goes out again.

It runs through Harold’s Cross, on the Grand Canal, onwards towards the quays. He passes the Deliveroo couriers and the strange puzzled pedestrian, quick enough to spot the platform, but not fast enough to detect a full melody.

When it hits speed bumps or curb transitions, its camera on the handlebars shakes violently, but the rack in the basket remains intact.

Byrne secured it in place with rubber bands, zip ties and industrial Velcro. Later, while rolling it along a driveway in the park, he demonstrates his strength by lifting the front wheel to a perfect right angle to the ground. Not a single piece of equipment falls.

The only challenge, he says, is the steering. The rack is heavy.

Yet it navigates the bustling docks with relative ease. He weaves his way around parked vans on the bike paths and stops outside the main gate of Phoenix Park to give a brief tutorial on how he builds a loop.

On the road, he can only play with the volume levels of each synth as they are fed into the mixer, he says, rather than creating new tracks on the fly.

However, if he could get a few group bikes around the park, that might change, he says.

With a few more bikes, he wouldn’t have to worry about traffic, he says. “I would actually be able to do a lot more than just try to stay alive.”

Byrne isn’t driven by a desire to recreate the spirit of the 90s. It’s more about finding ways to put things back together.

“Gary is very good at Tetris,” Swords laughs when she recalls realizing his rack of synthesizers could fit perfectly in a bicycle basket.

A portable sound system compelled him, because, he says, “it was the fact that you could set it up in a field, if you wanted to.”

Byrne says he lost interest in the disco when he realized he no longer had it in him to stay out until 6 a.m. Now what’s on his mind, he says, is the question of where else this music could potentially fit in.

‘Bleed Us Dry:’ Why Tech Platforms Are Facing Rebellions