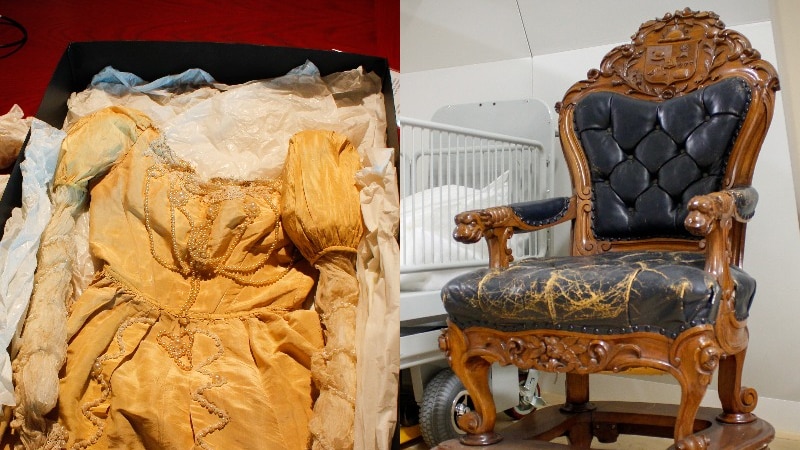 The Geelong Heritage Center preserves the city’s history in a hidden collection of 100,000 artifacts

Located on the third floor of the Geelong Library, a room with a luxurious red carpet and rich red walls invites you to deepen your research.

The space is known as Kim Barne Thaliuwhich means “here yesterday” in the local Wadawurrung language, and is home to the Geelong Heritage Centre.

People who come here often seek to learn more about their ancestors, who previously lived in their home, or about the indigenous and environmental history of the land.

But the publicly accessible reading room is just the tip of the iceberg.

With so many items, most of the center’s physical collection is off-limits to the public.

Director Mark Beasley holds the stories of some of the most unique objects entrusted to the center for safekeeping.

The entire extent of the treasure is in a vast gray room, filled with rows of metal compactors.

Measuring around 520 square metres, the archive is kept between 18 and 22 degrees Celsius and around 50% relative humidity all year round – “the optimum conditions” for the preservation of paper documents, according to Mr Beasley.

There are 44,000 described objects in this collection, but Beasley says not all of their artifacts have been cataloged in detail.

“I would estimate we would have over 100,000 articles archived here,” he said.

“Everything from newspapers in the area from 1840 to public records – so council records, rate books, council meeting minutes – but we also have a lot of material that comes from the community.”

In the 19th century, a fern craze swept through Britain and eventually spread to the colonies, including Australia.

As well as creating a major fern in the Geelong Botanic Gardens, he collected a collection of over 400 pressed ferns into a large leather-bound volume known as the “Raddenberry Fern & Lycopods” book.

The collection was believed to have been lost or destroyed until around 20 years ago when someone chanced upon it in the ceiling of one of the buildings at Geelong Botanical Gardens.

‘It was quite damaged when it was found and handed over to us,’ Mr Beasley said.

“We were fortunate to secure funds to carry out much needed preservation work.”

Over the past few years, conservators have meticulously taken the book apart, reattached some of the pressed ferns, and digitized the 248 poster-sized pages so people could peruse it online.

Each original page, alongside the crumbling leather cover, is now stored in its own cardboard folder, with archival standard tissue paper, in custom-made boxes at the Heritage Centre.

“Now it’s in a condition that will last for hundreds of years,” Mr Beasley said.

Relic of the First Royal Visit to Australia

In 1867, Prince Alfred became the first member of the British Royal Family to visit Australia, drawing huge crowds wherever he went.

On 2 December he came to Geelong and a ball was thrown in his honor at the local Mechanics’ Hall.

Among the guests was Mrs. WH (Maria) Collins. Neatly tucked away in a box is the silk dress Maria wore to the ball.

“When it relates to the story that she was there, at the town dinner for the first royal visitor to Geelong – to have that dress is extraordinary.”

The 160-year-old chair that raised the mayor

Despite extensive research by the Geelong Heritage Center team, the exact origin of the Geelong Municipal Chair remains a mystery.

They believe it dates back to around 1860 when William Ashmore, one of Geelong’s first furniture storekeepers and upholsterers, was a member of the local council.

Council minutes of 3 May 1856 show that £54 was paid to Ashmore & Sons for “office furniture for the mayor’s chamber”, a considerable sum at the time.

Almost 100 years later, in 1950, the Mayor of Geelong, Bervin Purnell, found the chair in the basement of City Hall and paid to have it reupholstered and polished.

The ornately carved wooden chair features dragons on the armrests and the Geelong crest above the leather backrest.

There is also a platform that looks like it was retrospectively added under the original chair legs.

“Going back in history, there was one mayor in particular who might have been, let’s say, challenged a bit vertically.

“The story goes that he had this platform added under the chair so that at least when he sat he was as tall, or maybe slightly taller, than the other councilors and aldermen around. bedroom.”

When designing the Heritage Centre, Mr Beasley told the architects he didn’t want the space to be ‘dull and boring’.

They returned with a bold red interior – the same red as the Whitehouse Library – to symbolize the area’s rich history and heritage.

Hundreds of reference books are on display in the public reading room, alongside desks and red chairs, along with an interactive ‘cruise table’ where visitors can explore digital objects and ‘throw’ them on a screen above.

“We are the custodians, if you will, of the recorded history of the Geelong region,” Mr Beasley said.

“Thus, we are able to care for and preserve this history for generations to come.”