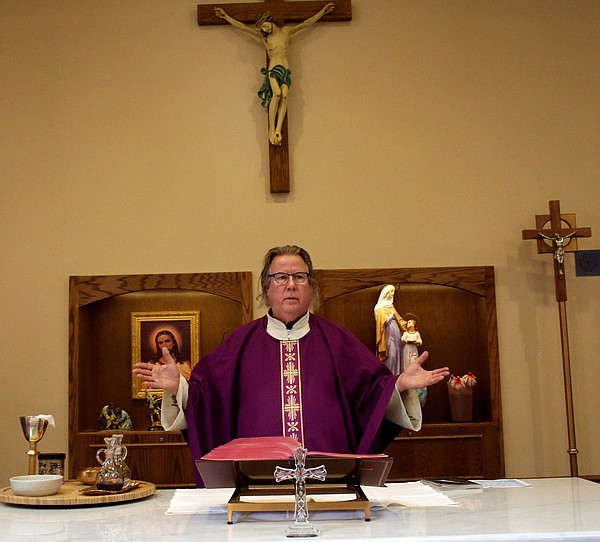 Rudy Moni, the musician from Stella Maris, a Catholic chapel in the shadow of empty shipping containers in Port Newark, NJ, adjusted a microphone, strummed his guitar and shouted at Reverend John Corbett on the first Sunday of the Advent.

“One one and one two,” Corbett said.

Sixteen communicants sang “Be Not Afraid” to begin the mass. When they were done, Corbett, 63, complimented the congregation.

“I feel like I’m at the Winter Garden Theater with Bob Dylan, Van Morrison and Neil Young all in one,” he said.

It is an eclectic constellation in Stella Maris, Latin for Star of the Sea. Longshoremen pray at two benches of armed United States Customs and Border Protection officers, and crane operators offer peace to the curious as large platforms rumble past the nativity scene outside year-round on Corbin Street, a main hallway. To make themselves heard, they sing over a chorus of train whistles and truck horns. As Christmas delivery times loom during the supply chain crisis, cranes beep, the chassis rattles, and the chapel vibrates as trucks pass. At night, Corbett sleeps on a pull-down bed in his small office. To meditate, he wears silicone earplugs.

“We are an oasis in the middle of an industrial desert,” he said.

Corbett is an unlikely headliner. Born in the Bronx, he grew up among bungalows in Silver Beach, graduated from the State University of New York Maritime College in 1980, and sailed as an engineer on tankers from Portland, Maine, to the Panama Canal. He plied his trade for three years before dropping anchor on Long Island, where he bought a house – a DIY special – and took a job with Con Edison, working at a power station on the East River. But after three years and a period with a charismatic prayer group, he experienced a calling by raking the leaves.

“I felt Jesus next to me,” he said. “He didn’t have enough good priests.

Corbett sold his house and truck, moved into St. Joseph’s house in Manhattan, and went from $ 52,000 a year to a stipend of $ 10 a week. He continued in the priesthood, completed eight years of study, and was ordained a priest at age 37, the same day as his brother Rich, two years his junior. His first posting was in a parish in Jersey City, and his second as chaplain in a nursing home, then in a retreat center in Kearny, NJ, before being posted to the nearby port.

“I prayed to the Lord and He told me to be obedient,” Corbett said. “I am generally not obedient, but in this case, I was.”

The address of the chapel might be difficult to find. In 1977, Reverend Charlie McTague looked after the sailors aboard their ships and gathered the workers to worship in a par 50 cinder block gatehouse on the canal. Robert Chin, then a crane mechanic who found the chapel by recording overtime on Sunday, recalled that the priest had welcomed him to confess in a boiler room for lack of space.

Sinners followed McTague wherever he celebrated Mass, whether in containers or trailers. He walked the catwalks, organized shipboard services, organized Alcoholics Anonymous meetings, and preached calm in the midst of chaos. In 2002, a prefabricated chapel was built with money from John LoBue, the founder of the Foreign Automotive Preparation Service. Stained glass windows depicted Jesus at sea. When Corbett arrived in 2005, his long hair, his black leather jacket, his penchant for drinking more than sacramental wine, and his mastery of Port dialect made him love dockers.

“People are looking for meaning in their work,” he said. “They must understand that their work is holy. When Jesus called his apostles, each of them was working. No one was praying in the church.”

Then, in 2012, Hurricane Sandy flooded the chapel with 40 inches of water; the congregation was moved once more. Corbett reinvented the space and had a marble altar imported from Italy. He placed a wooden tabernacle in the shape of a ship in the center and installed a system of pulleys to hang a candle from it. When the building vibrates from the traffic of trucks, the candle wobbles from time to time.

“No matter how loud it is during the dedication, I can’t hear a thing,” said Liam Rogers, a warehouse operator. “All the noises are fading.”

Rogers, 63, first attended midday mass on a weekday in 2006. It was just him and Corbett. Two of Rogers’ brothers had died the previous year and he was looking for answers. He took Corbett’s frank approach that Rogers called “bare-handed theology” and has been a daily communicator ever since.

When the coronavirus pandemic began, Corbett received an email from the port authority saying all the staff at the marine terminal were essential workers, and he posted it on the glass lobby door. He maintained his ministry, but many devotees stayed away. For two summers, the blessing of the port has not taken place, and it has lost eight regulars in retirement. The congregation now numbers 25 to 30.

At night, Corbett sits in a reclining chair in the chapel and pulls a blanket. On request, he visits ships to celebrate morning mass and responds to emergencies. A few years ago, Jimmy Petrocelli, a third generation longshoreman who has been coming to the chapel for 43 years, had a worker in his workshop who lost a hand changing the cables of a crane 180 feet above the dock. . The injured employee requested the anointing of a priest before the operation. Corbett rushed to the university hospital.

“Father is as important to me as an ambulance,” said Petrocelli.

Corbett seeks balance at this time of year. On the first day of Hanukkah, a devotee brought a menorah that his girlfriend, whose family is Jewish and Catholic, donated to the chapel. Corbett lit a candle every eight days and presented the menorah near the tabernacle. Last week, a lawyer who sells Christmas trees nearby filed one. Corbett is savoring the season. On the third Sunday of Advent, he dressed in traditional pink clothes. He smiles on the altar.

In formal attire, he drives a silver van with a yellow light on top through the busy lanes of the harbor, past a greasy spoon lunch, and past a doorway near an old sewing machine factory. Singer. It’s waterfront land next to a warehouse with shattered windows, and it points to a rocky ledge between concrete blocks, where he gazes at red-hulled ships under the Bayonne Bridge and pray the rosary.

“Even on a miserable day, there is something that I enjoy being around the water,” he said. “It could be stormy, in the middle of winter, but I would feel at peace.”

The serenity is fleeting. During the midday mass that day, worshipers looking through stained glass windows could see the silhouette of trucks speeding to and from the port. When a large platform hit a bump on the outside, the chapel shook; airplane engines roared at the airport.

As Corbett prepared to distribute the Eucharist, Moni announced the next hymn. It was number 305 of the seasonal songbook: “Silent Night”.